A Trip to Odessa on a Rented Car Rent a car to visit Odessa

When you have no desire to travel to Odessa on a train, you do not have enough money to make a flight and you want to drive the whole road by yourself only, being at the wheel of a powerful car, a service of car rental in Odessa and other cities of Ukraine will always help you.

When it is better to visit Odessa

1. Odessa is famous for the fact that it is located on the Back Sea shore. That is why it attracts many tourists in summer period. Being on the Black sea shore and swim in the summer heat in the cool water – if it is not a reason to drive to Odessa on a rented car?

2. In autumn tourists come to celebrate the City Day, Odessa birthday is celebrated on the 2nd of September. Different fairs, festivals and other arrangements – and the atmosphere leaves unforgettable impressions as in the memory of locals, who celebrate the City Day every year, so in tourists who come to Odessa for the first time. Besides, when there is no summer heat, it is more comfortable to observe places of interest in Odessa. And you will not spend a bigger part of your budget to satisfy your thirst

3. Odessa New Year is completely different from the same holiday in other places of Ukraine. Everything because Odessa is located on the South of Ukraine. Not in every New Year there is snow on the city streets and the temperature is much warmer. So, you can have a walk on Odessa streets and not freeze to the bones.

4. In spring Odessa plants starts to bloom much earlier than the same plants in other cities. The 1st of April in Odessa is celebrated in its own way: there is “Yumorina” festival in the city, people from different parts of the country come to see it. Besides, it is this very day when a touristic season is unofficially opened in Odessa. Is this not a reason to rent a car and spend the laughter day and in the festive atmosphere of happiness and jokes? 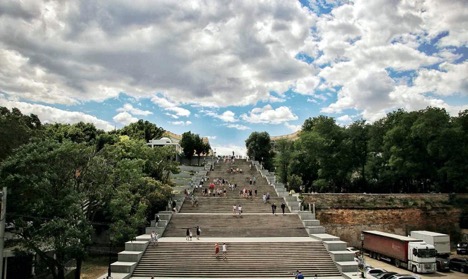 Recommendations of being there or how to survive in Odessa

One of AutoArenda company clients left his feedback about making a trip to Odessa. Considering it rather… interesting, from the permission of the “owner” we publish it in this article:

“Some fine day I rented a car and put on skates to Odessa. I cannot say an exact reason why making a trip to Odessa came to my mind and not just on a train but driving car on my own. I have driven for 8-9 hours, I could make it faster on the route but I did not try to risk because I want to live. So, in such a way, tired and half-asleep I came to Odessa.

It was a late spring, just the beginning of the touristic season and I came to Odessa on weekends when there is not enough room to swing a car.

To start from the most important: before coming to Odessa, the first thing you need is to download the city map. I wanted to have a walk on Derybasivska street, as it is a legendary and main place of interest in the city – no one of the locals told me the answer on the question how to get there: everybody shows on different sides with both hands. Very “useful” peculiarity of the city.

When I finally downloaded the city map, I drove in search of the local hostel. I didn`t want to get asleep behind the wheel and damage a car because if I do not return the deposit for the car back to home – it is better for me not return at all.

Everything was great, the car made me no problems (unlike I made problem to the car). Even taking into account all abovementioned adventures, I remember only positive moments from this trip”.